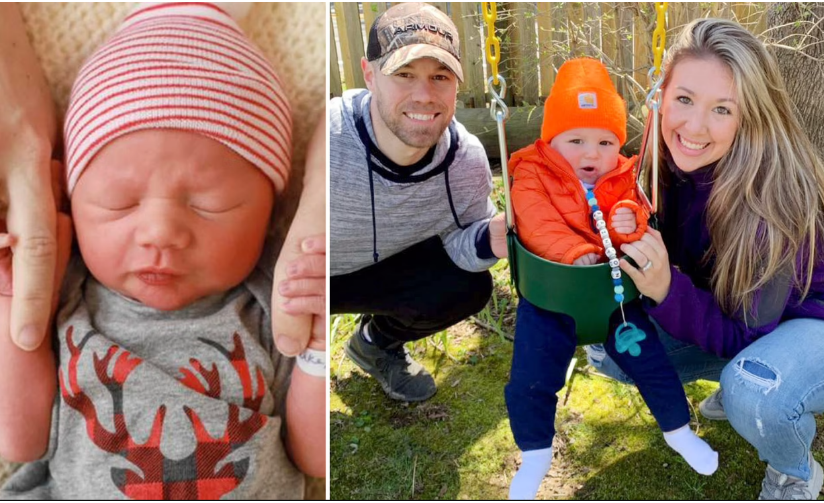 One incredibly powerful mom experienced the highest highs and lowest lows life has to offer, all in a matter of hours.

Haley Parke was pregnant with her and husband John Brinton (JB) Parke’s second child as he battled cancer. JB was diagnosed in January 2021. The couple was aware JB had about six months to live, but all of that changed when he was admitted into the hospital on November 28. They sadly learned JB had just days left to live.

The two made the decision that Haley would be induced so that JB would be able to meet his son. When the induction didn’t bring natural birth fast enough, Haley got an emergency C-section. JB was able to meet and hold his son. Haley’s hospital bed was rolled into the room so she could spend her husband’s final moments with him and their newborn.

Haley Parke penned a beautiful, emotional Facebook post laying out how she welcomed her son and lost her husband in the same day.

“I come to you all with news that is the most joyous, but also the most somber,” she wrote.

“On December 2nd, my husband Jb and I welcomed our second son, earth side. This boy entered the world in the most brave and magical way, with a very big miracle to fulfill in a short matter of time.”

“My husband Jb was admitted Sunday to Hartford hospital with complications from his cancer. Wednesday, we received word that his 6 month prognosis was now turning into a matter of days,” she revealed.

“With our second son’s due date 3 weeks away, my husband and I knew asking for an induction was the right thing to do. Without hesitation, the team of ICU doctors communicated with the head of high risk labor and delivery doctors. They offered me an induction as soon as I was ready.”

Haley had hoped the process would go quickly from there, but things didn’t go quite as planned.

“I kissed my sweet husband goodbye and told him to be strong and hold on for me and the baby – he said he would,” she shared.

“We began the induction process Wednesday night with hopes of a quick labor and a vaginal birth. Those plans changed in an instant when a team of ICU doctors entered my room Thursday morning at 8 am with the news that Jb was declining fast and had a matter of a few hours.”

“It was either a c-section right at that moment, or Jb would not have the opportunity to meet our son,” she continued.

“With out a question in my mind, I said ‘Let’s go’ and we did just that. In a matter of literally one minute, I was in the OR, and in just a short 20 minutes later, our son was born.”

Within a matter of minutes, JB got to meet little JB.

“He was given to me for a quick kiss, and then a team of doctors and nurses ran him up 2 floors, and he was placed on his daddy’s chest,” Haley wrote.

“The miracle of all this? When our baby was placed on Jb’s chest, Jb’s vitals all instantly improved. He was also acknowledging our son was there by making small head movements and sweet moans.”

Meanwhile, doctors worked on Haley and got her cleaned up and ready to move. Her bed was wheeled into her husband’s hospital room so she could spend time with both JBs.

“Straight from the OR to ICU, I went,” Haley shared.

“I spent my recovery time gazing at my husband. I was gazing at him in sadness, but in awe of his strength. He took his last breaths with our son on his chest and my hand in his hand.”

“Delivering a baby 3 weeks early can come with a slew of complications that can require NICU time and breathing support. God prepared our son for this very moment because he came out weighing 7lbs 4oz at 20in long, with fully developed lungs that let out the sweetest of cries,” she wrote.

“From the OR to the ICU room, there were what felt like hundreds of doctors and nurses floating us through this process effortlessly. Not one of them having a dry eye the entire time.”

The medical staff shared their emotions in these moments with Haley.

“Some of them told me they’ll never forget this act of selflessness. Some called my actions brave and heroic,” she wrote.

“I just call it love. I acted out of love. I put my trust in God that this was part of his plan, and I did what I had to do, out of love, to fulfill my husband’s last wish.”

Haley and JB hadn’t picked out a name for the baby, but Haley decided there was only one that fit.

“Up until the moment of induction, we had not had names picked out. I knew in my heart it was only right to honor my husband,” she wrote.

“So, it is my pleasure to announce the birth of our brave, amazing son, John Beeson Parke (Jb). Welcome to the world baby Jb. Your story is truly a miracle.”

A GoFundMe page has been established to help Haley through this difficult time. Thus far, it’s raised over $92,000.