Old man looks at wife of 59 years and says ‘I know you can’t hear me, but I love you’

Old man looks at wife of 59 years and says ‘I know you can’t hear me, but I love you’ 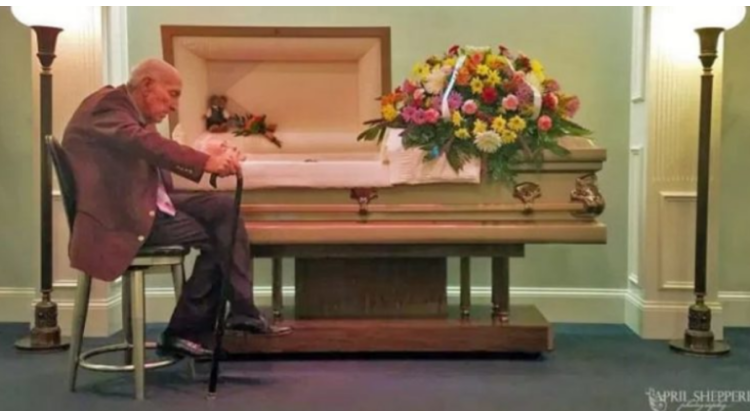 Today, I witnessed a story of love. Not the type of love shared by young people who are half full of passion, topped off with hormones. It was not the type of dewy love experienced by newlyweds who are enthralled with the idea of exclusive devotion and the happily ever after.

In such a world as ours, where vows are broken as quickly as the downing of a gavel, what I saw today was a rarity, a diamond exquisite in design.

Today I saw a man, a broken man, standing vigil over his most prized possession. Here was love personified.

When he walked into the room his steps were faulty, but his determination was undaunted. His eyes were fixed upon his destination at the front of the room. A steel grey casket sat under the colored lights.

Half of its lid was propped open; the closed half held a spray of vivid, mix-matched flowers adorned with ribbons which read the words “wife” and “mother.”

Upon approaching and without pause, he leaned down and kissed her painted lips, his frail body trembling to keep upright.

So gentle and soft came his words to her. Surely these words were spoken innumerable times, but this time it was shrouded in finality.

And his tears fell.

Family visitation was not scheduled for another hour or so, but he had come early. He wouldn’t squander these last few hours. For over 60 years she had been by his side, but it still wasn’t enough. Not near enough.

So, he pulled up a chair and they sat.

Strange as it seemed, this could have been a normal scene from any given evening within their home. Except for the plethora of lavish flora and small gifts sent by sympathetic friends, this scenario seemed completely normal.

When family began to trickle in, he was still sitting there, holding her hand, stroking her hair.

“She looks good, doesn’t she?” he asked when his children approached. Everyone agreed. And they cried.

For nearly five hours he stayed nearby, exhausted, spent, until his body demanded he retire and his mind pleaded for respite.

This man, this devoted man, had shown more grace in his time of grief than many do in times of plenty. I stood by in awe, watching faithfulness on display.

Never had I seen a man so broken, robbed of his happiness by the curse of death. I wondered as I watched him, what would he do tomorrow and the day after that?

Today was the easy part. Today she was still here, lying beside him, able to be touched or seen or kissed. Tomorrow, after she is laid deep in the ground, and he returns to their home, what then?

See also  After Robert Urich passed away, his wife vowed to pursue his dream about their adopted son…

Her things will still be there – the smell of her skin, scribbled grocery lists, her favorite chair, leftovers in the fridge, their bed. Their bed. How does one sleep alone after 59 years of lying next to your best friend? I can’t imagine ever sleeping again.

Today, I witnessed a story of love. And I shall witness it again tomorrow when the story finally ends, and the stage is empty, and the lights go dark.

For Bobby, and all that he is.

Writer’s Note: At the request of the Bobby Moore and his family, I am sharing this narrative and photograph. This story was never meant to be seen by anyone. It was written solely for my own healing and to digest the very poignant moment I had just experienced.

As I watched Bobby with his wife, I knew I was privileged to share a moment that conveyed volumes of time. As a photojournalist, I know photographs such as this capture verbs.

It is a window into the event; a bearing witness, if you will. The Moore family have hope that publishing this piece will grant healing to others.

April Yurcevic Shepperd is a seasoned print and photojournalist, her passion is capturing a moment in time through photographs or the printed word. She feels that nothing compares to releasing your shutter, knowing that single frame tells the whole story; or writing so vividly, her readers can see through her words. You can follow her on her Facebook photography page.