An educator, who was previously recognized as “Teacher of the Year,” allegedly performed oral sex on a student in her classroom. The family and consumer science teacher has since been arrested. 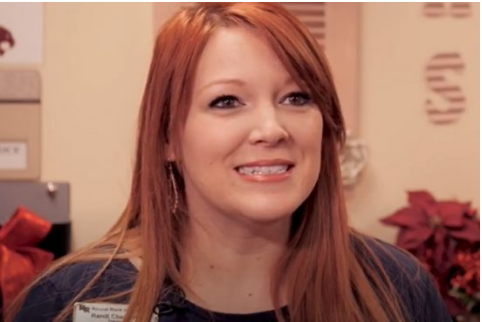 Randi Chaverria, a 36-year-old family and consumer science teacher at Round Rock High School in Round Rock, Texas, was a trusted educator in her community. In fact, she was so well respected, she was even recognized as “Teacher of the Year.” So, it came as a huge surprise when the Texas educator turned herself in after being accused of repeatedly giving oral sex to a student in her classroom.

Chaverria, who lives just blocks from the school, was arrested by Williamson County police on second-degree felony charges of an improper relationship between an educator and a student, which carries a maximum sentence of 20 years in prison. According to KXAN, court documents detailed the nature of a relationship Chaverria had with the unnamed student at Round Rock High, where she was employed. 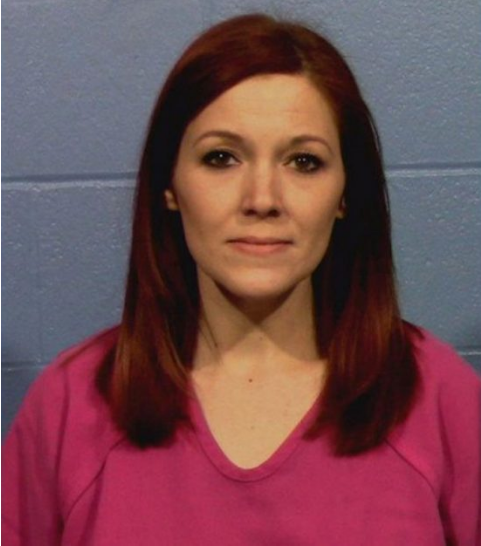 According to the affidavit, Chaverria engaged in “sexual contact or deviate sexual intercourse” with the student, who spoke with Round Rock Police. The student explained that during the fall semester “on several occasions” Chaverria called him and had sexual contact with him, including performing oral sex. This student also told police that the two had oral sex twice in Chaverria’s classroom.

Text messages between Chaverria and the student supported the student’s allegations, according to police. Randi Chaverria resigned her teaching position with the district, and the situation was reported to the State Board for Educator Certification. Round Rock High School Principal Matt Groff also wrote a letter to families, saying that school administrators were aware of the possible inappropriate behavior.

“Once notified, the teacher, who had elected to take leave before administration received the report, was immediately reported to the District’s Human Resources Department and law enforcement and not permitted to return to campus,” Groff wrote. “Safety is the top priority of Round Rock High School and Round Rock ISD. Ensuring a safe and secure learning environment requires partnership between students, parents, campus and district staff, as well as law enforcement.”

Chaverria, who had been a teacher for over five years, had passed a Texas Department of Public Safety background check before being hired, as well as employment reference checks. For the two years prior to her arrest, she had worked as a Family and Consumer Science teacher. She had also won “Secondary Teacher of the Year” from the district just months before her arrest.

“The most important role of a teacher is to help shape future generations to become successful members of our community,” Chaverria was quoted as saying. “More than any curriculum I teach my students, I hope that they will walk away from my classroom thinking of ways that they can make a difference in their community and impact the lives of others for the better.”

A release announcing Chaverria’s award praised her for having “developed her own goals of what she hopes to instill in her students, which transcends curriculum and aims to create well-rounded students who make a difference.” It also applauded her for leading the “Adopt-A-Child” community service project, where high school students adopt elementary school students in need and buy them holiday gifts. 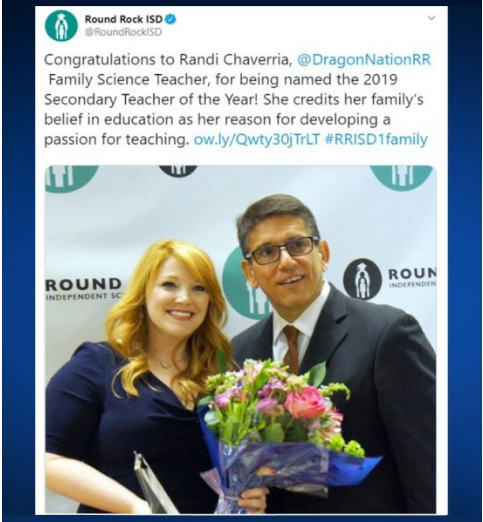 Randi Chaverria was named “Teacher of the Year” (Photo: Twitter/RoundRockISD)

By all accounts, Randi Chaverria was a trusted role model, but it seems she was an adult in a position of authority, who preyed on a child to fulfill her own perverse desires. Sadly, she is not alone. It’s a growing trend as reports of inappropriate relationships between students and teachers have increased in recent years, according to Texas Education Agency officials, KVUE reported. In fact, reports have nearly quadrupled in a decade, and female perpetrators have become a significant problem.

See also  8-Year-Old Dies three times, wakes up, and says, “Jesus said I had to come back to Earth to tell others about Him.”

While we often picture men as potential child predators, a 2017 study published by the U.S. Justice Department found that the percentage of female educators charged with such crimes is rising. What’s worse, according to Psychologist Anna Salter, an expert on sexual predators, women who sexually target students are typically married mothers in their mid-30s. “They think they love the children,” she explained. 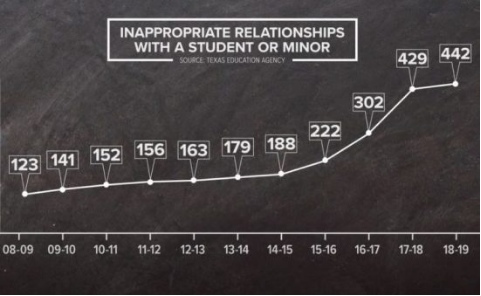 Reports of inappropriate relationships between students and teachers have increased in recent years. (Photo Credit: Screenshot)

Charol Shakeshaft, an education professor at Virginia Commonwealth University who led the research in a 2013 study, said these women are known as “opportunistic abusers.” These predators “tend to spend a lot of time around groups of students, talking with them, going to the same places they go, and trying to blend in,” Shakeshaft said. “They are the teachers who want to be seen as hip or cool and who want the students to think they are part of the student peer group.”

Sadly, as this story seems to prove, these women are often well-trusted by parents, administrators, and the community in general. What’s worse, they are often shown leniency because they are women, and some adults will even joke, “Where were these teachers when I was in school.” The truth, however, is that these students are not “lucky” to become an educator’s love interest. This is abuse, and it should be viewed and handled the same way it would be if the sexes were reversed.