Fed-Up With Dog Feces In Her Yard, Woman Gets Perfect Revenge

There are some things we should all be able to agree are just downright rude, like letting your dog defecate on someone else’s property and refusing to clean it up. But, that’s exactly what at least one dog owner was allowing their pet to do. That is, until a woman, fed-up with dog poop in her yard, got revenge. 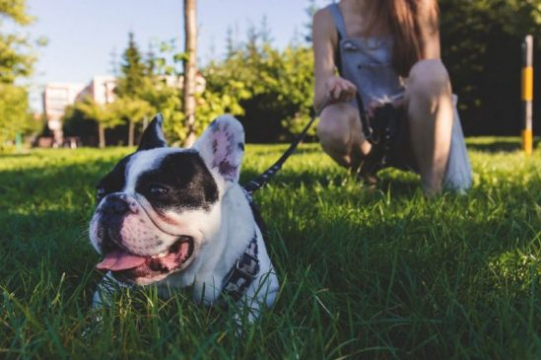 A Los Angeles woman, only identifying herself as “Annie,” ran out of patience with people who allow their dogs to freely poop in her yard, then refuse to pick it up like they are supposed to do. She finally decided to do something about the dirty behavior and posted a sign in her neighborhood that warned all dog walkers exactly what she will do if she sees them letting their dog drop a deuce on her lawn.

The sign was written on cardboard and taped to a sign near the intersection of Wilshire Boulevard and Sweetzer Avenue, UPI reported. According to a photo of Annie’s sign posted on Reddit, the next time a certain someone doesn’t clean up Fido’s chocolate stink biscuits, she has vowed to follow them home, wait until they get inside, and then “take a huge dump” on a thing or two of theirs, leaving a mess for them to clean up so they know how it feels.

Addressing the note “To the next person who lets their dog poop on our lawn and doesn’t clean it up,” Annie doesn’t hold back in getting her point across. “First of all, it’s beyond rude. We live here and pay a lot of money to live here and it’s not a toilet,” she wrote. “Secondly, if you can’t pick up your dog’s poop, you shouldn’t have a dog,” she continued.

“And lastly, we are watching you,” she warned. “The next time you let your dog poop on our lawn and don’t pick it up, I will personally follow you back to your home, wait until you get inside, pull down my pants, and take a huge dump on your doorstep and on the windshield of your car,” she concluded. 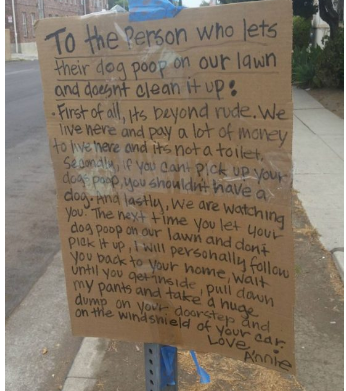 Yes, Annie not only threatened to take a crap on the dog owner’s doorstep, but she also claimed she would pinch it off so she can move over to the windshield of the dog owner’s car and finish the job there. Although this is more than bizarre and creates quite the graphic mental image, Annie makes a pretty valid point in her note. She pays a lot to live in her house in her neighborhood, and her yard should not be used as a community toilet for pets with lazy owners.

“Lots of disgusting, filthy, psychopathically self-absorbed people in LA leaving dog sh*t around all over the place. It’s incredible how much dog sh*t you see on the sidewalks in some neighborhoods,” one sympathetic Californian confirmed. So, it’s no wonder Annie has the urge — no pun intended — to retaliate with her own feces the next time her lawn is found to have been defiled. Granted, her threatened mode of revenge is disgusting and absurd and would likely get her arrested, but people should really be more considerate of other people’s property. 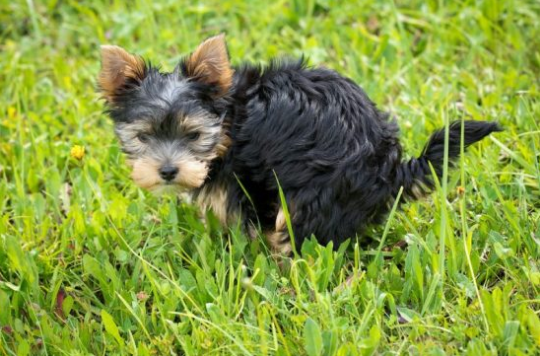 Many dog owners seem to agree that Annie has every right to be annoyed by the disrespectful behavior because they are too. “As a dog owner, this infuriates me like no other. I live in a neighborhood where there are a lot of dogs and there is dog sh*t everywhere. There are plenty of buildings around that have free poop bags and trash cans, but people are f*cking lazy. There have been some instances where I ran out of bags, but I’ve always gone back to pick it up,” one Redditor commented.

“I feel like non-dog owners give me the stink eye whenever I’m walking my dog and I understand,” the equally fed-up dog owner added. “They don’t know if I’m one of those a**holes who don’t pick up after my dog. I even had a security guard shout ‘EXCUSE ME’ after my dog took a sh*t. Mind you it wasn’t even 10 seconds after he went to where she felt like she had to shout to me across the street.” 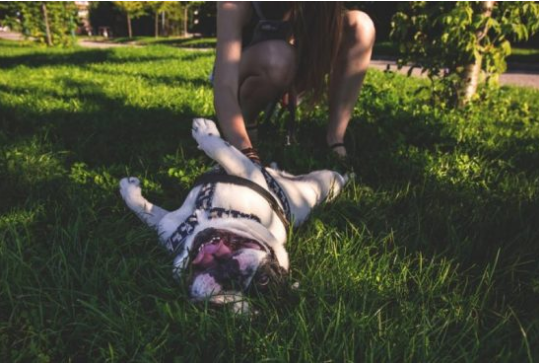 Perhaps the best part of Annie’s sign is the way she sarcastically signs off at the end with a “Love, Annie.” Yeah, I’m not so sure the guilty party is feeling any love after reading the blistering note that was left for them regarding their dog’s poop. Hopefully, they were humiliated into compliance. Although, there’s sadly no word whether or not Annie was ever forced to follow through on her threat.

A word to the wise for any lazy dog owners out there: Just scoop the poop. You signed on for that responsibility when you adopted your beloved canine into your family. Do the right thing so you aren’t creating a bunch of crazed, deuce-dropping Annies in the world.